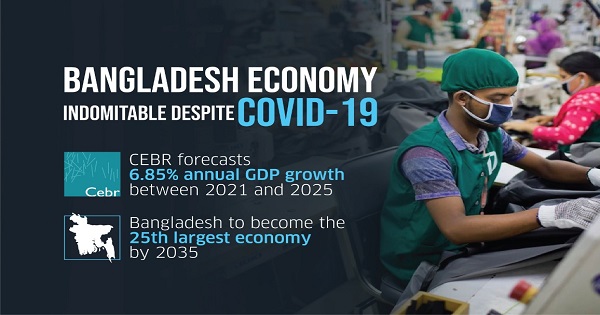 While the world is reeling under an economic crisis due to the Covid-19 pandemic, Bangladesh’s economy was able to escape a contraction in 2020 and its annual rate of GDP growth will continue to accelerate throughout the 2021-25 period, so says a think tank.

Between 2021 and 2025, Bangladesh’s annual rate of GDP growth will accelerate to an average of 6.8%, forecasts the Centre for Economics and Business Research (Cebr) in an annual report published on Saturday.

The London-based economic forecaster also stuck to its pre-Covid-19 assessment of Bangladesh becoming the 25th largest economy in the world by 2035.

It also projected that China would overtake the United States to become the world's biggest economy in 2028, five years earlier than previously estimated due to the contrasting recoveries of the two countries from the Covid-19 pandemic.

According to Cebr, Bangladesh’s economy will fast progress to being the 25th largest one in 2035 from its current 41st position.

Cebr noted that Bangladesh’s economy enjoyed a strong rate of GDP growth in the years leading up to the Covid-19 pandemic, despite a modest rate of population growth, which averaged just one percent per year over the past five years.

“Bangladesh has so far had a more contained Covid-19 outbreak than has been observed elsewhere in the world. As of the middle of December, the country had recorded 7,052 Covid-19 related deaths, equating to 4 deaths per 100,000 people,” states the 12th edition of the Cebr’s flagship annual report, World Economic League Table (Welt).

Between 2020 and 2035, Cebr forecasts that the position of Bangladesh in the World Economic League Table will improve considerably, with its ranking rising from 41st to 25th by 2035.

It observed, “While the harm to public health inflicted by the pandemic has been relatively limited, the effect of the outbreak on global demand and international supply chains means that the economic damage has been considerable. Despite the Covid-19 pandemic, the economy was able to escape a contraction in 2020.”